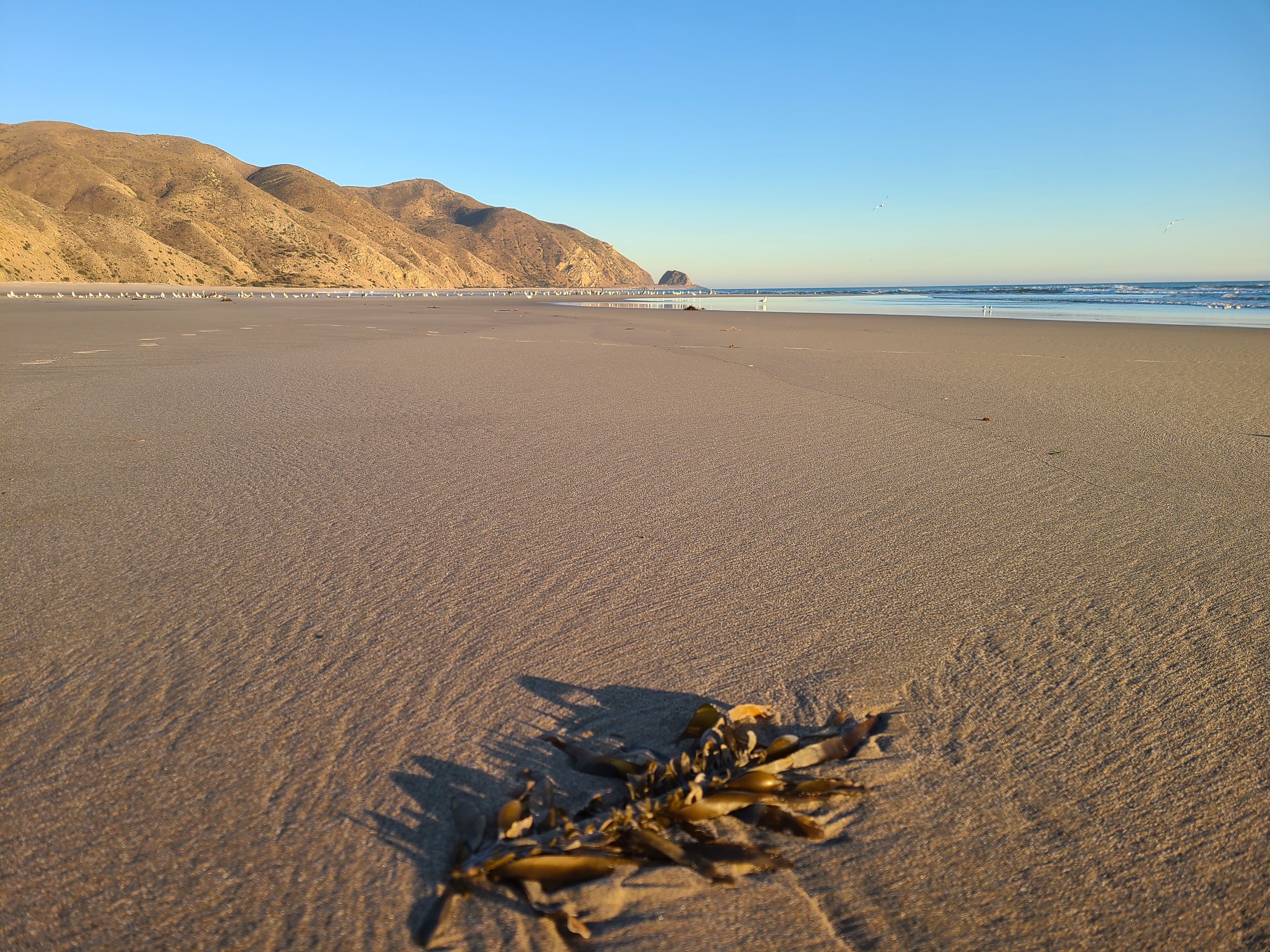 I recently visited the Mugu Lagoon inlet, and I was impressed by both the solitude and abundant life I found there.

Mugu lagoon is located at the mouth of the Calleguas Creeks, which is on Point Mugu Naval Air Station.  The lagoon itself is a sandy saltmarsh. It is the largest coastal estuary between Morro Bay of San Luis Obispo and Bolsa Chica Lagoon in Orange County. The entire estuary is owned by the department of defense. Mugu lagoon is an important wetland area that supports over 60,000 shore birds in Spring, and 10, 000 in winter.

I go on regular hikes throughout Ventura County, and I usually don’t observe large gatherings of animals. That’s why I was delighted and surprised when I arrived had arrived the Mugu lagoon inlet on December 2.  I arrived at 3:52PM and it was low tide. Until sunset at 4:46PM I was the only person on the beach. Because it was low tide the usually small beach behind the coastal armoring was extended out 200m along the shoreline toward Mugu Rock in the distance. There I observed hundreds of birds, along the sandy shoreline and in the lagoon. I observed many species of birds such as western gulls, sanderlings, brown pelicans, and willets. I am certainly no regular bird watcher, but I did find some happiness seeing so many of these birds going about their day, many standing still, others such as the sanderlings were feeding in the sand.

I continued my animal observations on the nearby rocks and found even more interesting animals.  These large rocks were placed here for coastal armoring by the department of defense around a parking lot right at the edge of the inlet. On the rocks furthest from the water, around 35m, I found the rocks covered in California Acorn barnacles, as I moved closer to the water the layers of barnacles transitioned to layers of exposed Aggregating Sea Anemones; all of them had withdrawn their tentacles and were covered in sand as both camouflage and to prevent themselves from drying out. Moving even closer to the water I started seeing Giant Green Anemones along the bottom edges of the large coastal rocks. The rocks here were also covered in mats of California Mussels and Pacific Acorn Barnacles intermixed with one another.

My visit to the Mugu Lagoon inlet was very pleasant. I am used to being around lots of people when I visit local beaches, and I was nice to have my time at this beach alone with the animals. Overall it would appear to me that the Department of Defense is doing a good job of ensuring that the estuary remains a healthy habitat for the many animals that depend upon it.

11 thoughts on “The Beach at Mugu Lagoon Inlet”